Home » About Us
Back to top

In 1985 Mollie Weeks, wife of George Weeks, history writer and political columnist, first opened the Cottage Book Shop as a used bookstore in a cottage behind the Glen Arbor Bed and Breakfast. Friends helped by donating books. After relocating between Ken Scott Photography and Ruth Conklin's gallery, she sold ten years later to Barbara Siepker, who with her daughter Brita, a high schooler at the time, worked together in the Book Shop. The store was later relocated  to the historic Arbor Light Building where Glen Arbor Artists Gallery is located on Lake Street.

In 1998, Barbara located a summer log cabin for the home of The Cottage Book Shop. It was a mile away on Glen Lake and had been build in the early 1920s by D.D. Day's nephew, Larry Day. It was moved intact including the bark on the cedar logs, and flowers in the flower boxes to its location across the street. It has been restored and winterized with original rooms and enclosed porches providing cozy natural locations for its book selections of regional, children, fiction, architectural, history and indie commerce bestsellers. The loft serves as office and storage.

In April of 2014, the store changed hands when Barbara sold the store to Sue Boucher who moved to the area in October 2013 after having visited the area with her family for 20 years. You might recognize Sue as she has helped out in the Book Shop the last two summers. Sue owned the Lake Forest Book Store in a suburb north of Chicago for 18 years before moving to Leelanau County. She has been involved in the Great Lakes Independent Booksellers Association and the American Booksellers Association for many years. Sue looks forward to many years of sharing books with the wonderful customers of the Cottage Book Shop. 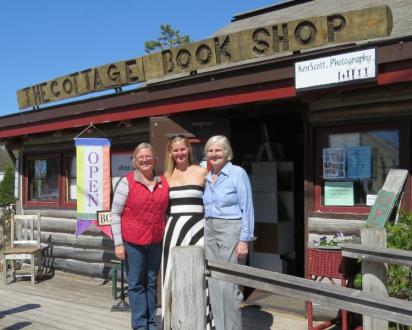