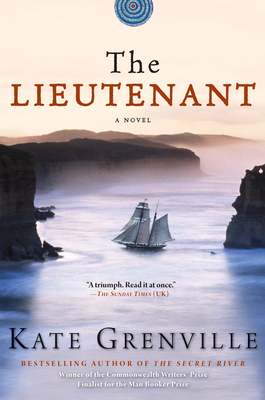 “Kate Grenville brings alive the rigors of life in the newly established penal colony in Sydney Harbor and the thrill and excitement of the first exchange of information across two unintelligible languages. The first encounters of two cultures are told from the unique perspective of a gentle mathematician, who begins to empathize with the native tribes, to the lasting detriment of his military and scientific career.”
— Darwin Ellis, Books on the Common, Ridgefield, CT

As a boy in England, Daniel Rooke was always an outsider. Ridiculed in school and misunderstood by his parents, Daniel could only hope--against all the evidence--that he would one day find his calling. His affinity for and ability with numbers takes him away from home and narrow-minded school, winning him a place in the Naval Academy where he becomes obsessed with Euclid and Kepler, with their concepts and theories of the orderliness of the world where everything--including a misfit like himself--has a place and purpose. When he fails to secure an observatory position with Astronomer Royal, Dr. Vickery, Daniel enrolls in the Marine forces and is assigned as a Second Lieutenant to the Resolution. His travels with the Marines expose Daniel to a world he'd thus far only read about in books. A journey to Antigua brings him face to face with slaves--real, flesh-and-blood human beings not unlike himself, perplexingly compared to objects and animals by his previous acquaintances in England. He loses his virginity in a bordello and any remaining sense of innocence soon follows suit when a battle with a French fleet turns deadly. Daniel watches as his friends and compatriots fall all around him, bloodied and mutilated, until a brutal blow to the head knocks him down as well, bringing him within 1/4 inch of losing his life. The war ends and two year pass slowly by as Daniel lives at home once again where he makes a meager living at tutoring math and sciences. Stir crazy at his relative idleness and inadequacy, Daniel seizes on an opportunity to travel to the remote and unknown shores of New South Wales. The British have begun exporting the overflow of convicts to the faraway continent, and Dr. Vickery recommends the soldiers travel with an astronomer--he can help navigate the seas and the land, and document a comet that Vickery has predicted will once again appear within the next few months. Despite his age and inexperience, Daniel takes the position with the hopes that he will be able to erect his own observatory and examine the sky from an angle none of his colleagues have ever seen. At first, his observatory is met with resistance from the leading officers. There are only 200 Marines to control 800 convicts--no men can be spared to help build Daniel's station. But they soon relent, and Daniel is allowed to begin his studies at a dark, secluded point far removed from the rest of the men at Sydney Cove, where Daniel sits with his rifle loaded, unaware of how close the aborigines tread. When the supplies crew fails to arrive in Australia, food becomes startlingly scarce, forcing the soldiers to reach out to the elusive Aborigines who have met their previous attempts at introduction with indifference and distrust. Along with Silk, Daniel's old friend from the Resolution, Daniel volunteers to track down natives who might be willing to help them find a sustainable source of food. While the men--including a prisoner, Brugden, whose meant to hunt--trek through the rugged, untouched landscape, most find the country a barren wasteland, but Daniel sees a beauty that makes his convenient homeland seem inhospitable. He marvels at the undiscovered species of flora and fauna, at the clarity of the sea and the unfamiliar arrangement of the stars, and he finally--for the first time in his life--feels at peace with his surroundings. Though the expedition brings no food back to the camp, the crew does stumble upon a stretch of fertile land where they might grow produce and build a second post. They also fail to return having made significant contact with the native tribes. In fact, as Brugden is out hunting one evening, he claims a clan of Aborigine men attempted to attack him. Without waiting to see if he left any injured or dead, the prisoner fired his rifle into the thick of them and ran back to the soldiers. Their failure makes the Governor uneasy and he soon orders that since no natives came forward of their own will, he will seize two of them, teach them English and hope to learn their language and customs in return. He calls upon Gardiner, another old acquaintance of Daniel's from his first expedition with the Marines, who follows his orders despite his conscience. With Silk's help, Gardiner captures two men, Boinbar and Warungin, who are frustratingly rebellious and escape within a matter of days, but not without leaving a small trace of their language behind. Silk asks Daniel if Gardiner ever told him how disgusted he was with their orders to capture the natives, if he ever spoke treasonously about the Governor. Startled by Silk's duplicity, Daniel lies and says that Gardiner never confided in him. It will take a year-and-a-half before the Aborigines willingly approach the foreigners. As Daniel sits in his observatory one day, having long given up on Vickery's comet, which never graced the sky, and instead turning his energy toward mapping new unknown constellations, Warungin and his clan approach the door. Within moments, the communication gap is breached and names are exchanged. Daniel isn't a threat, and this knowledge propels the entire tribe into his living quarters to examine his belongings and dispel their fears. As the women and children pull on his clothes and play with his instruments, Daniel spots a striking young girl, observant and mature, who very much reminds him of his sister, Anne. Upon speaking to her it becomes quite evident that she is exceptionally smart, interpreting his sign language, body language, and tone with startling precision. He learns her name is Tagaran and he asks that she return to his post the next morning. As Tagaran returns to Daniel day after day, a bond forms through language that will become the single most important, influential, and heartbreaking friendship that Daniel will ever know. Their interaction and discovery of language goes beyond simple vocabulary and grammar--it is the heart of talking, allowing them to find common ground a.

Kate Grenville is one of Australia's best-loved authors. Her works of fiction include The Secret River, winner of the Commonwealth Writers' Prize for Best Book and shortlisted for the Man Booker Prize and The Idea of Perfection, winner of the Orange Prize for Fiction.