Prayers for Sale: A Novel (Paperback) 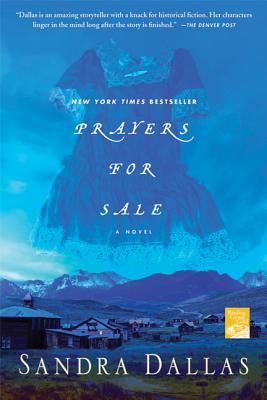 “During the 1930s Depression in the mining mountains of rural Colorado, two women form a close friendship while sharing their dark secrets of the past. Hennie, 86 and a widow, and Nit, 17 and newly married, tell of heartbreak, redemption, and forgiveness in this beautiful story that will deeply move its readers.”
— Carol Hicks, Bookshelf At Hooligan Rocks, Truckee, CA

From the critically acclaimed author of Tallgrass comes a powerful novel about an unlikely friendship between two women and the secrets they've kept in order to survive life in a rugged Colorado mining town.

It's 1936 and the Great Depression has taken its toll. Up in the high country of the snow-covered Rocky Mountains, eighty-six-year-old Hennie Comfort has lived in Middle Swan, Colorado, since before it was Colorado. When she first meets seventeen-year-old Nit Spindle, Hennie is drawn to the grieving young girl. Nit and her husband have come to this small mining town in search of work, but the loneliness and loss Nit feels are almost too much to bear. One day she notices an old sign that reads prayers for sale in front of Hennie's house. Hennie doesn't actually take money for her prayers, never has, but she invites the skinny girl in anyway. The harsh conditions of life that each has endured create an instant bond, and a friendship is born, one in which the deepest of hardships are shared and the darkest of secrets are confessed.

Sandra Dallas has created an unforgettable tale of a friendship between two women, one with surprising twists and turns, and one that is ultimately a revelation of the finest parts of the human spirit.

Sandra Dallas, dubbed “a quintessential American voice” in Vogue Magazine, is the author of over a dozen novels, including Prayers for Sale and Tallgrass, many translated into a dozen languages and optioned for films. Six-time winner of the Willa Award and four-time winner of the Spur Award, Dallas was a Business Week reporter for 25 years covering the Rocky Mountain region, and began writing fiction in 1990. She has two daughters and lives with her husband in Denver and Georgetown, Colorado.

“Dallas is an amazing storyteller with a knack for historical fiction. Her writing is fresh and current even though she writes about the past. Her characters linger in the mind long after the story is finished.” —The Denver Post